Horse of the Bedouin 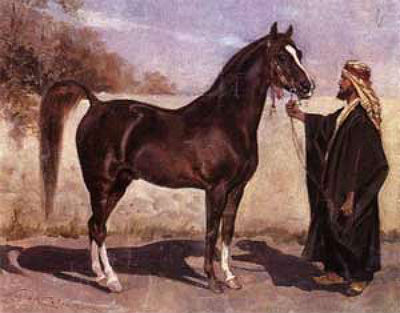 The horse of the Bedouin

Natural selection in a harsh environment and Bedouin-controlled breeding perfected its characteristics. The Arabian horse became the ideal instrument of war: swift, responsive, agile and enduring, with courage, loyalty and the ability to withstand privation.

The need to maintain the breed in this form was confirmed by the Bedouin’s constant struggle for survival in the desert and by inter-tribal warfare. They also believed that the Arabian horse was a gift to them from their Creator, to be cherished and protected as a member of the household. Therefore, for more than a thousand years, it was a matter of honor for the Bedouin, as well as a safeguard for their continued existence, to breed their horses pure as defined by their own strict standards.

The Bedouin created an oral system to identify each Arabian horse and ascertain its origin. They primarily rode mares and kept few stallions, and their method was based on female lines of descent. This matrilineal or strain system is hundreds of years old, dating at least as far back as 1660.

Strain names have at least two parts: the rasan and the marbat. The rasan (literally, “bridle” or “rope”) represents the interwoven strands of the entire pedigree of the horse, following the dam lines for generations. Rasan has come to be called strain in English. The marbat (literally, “the place where the rasan is tied”) adds provenance, generally representing the person who was primarily associated with that strain. For example, Kuhaylan Rodan. The rasan is Kuhaylan and the marbat is Rodan, connecting the rasan to a man named Ibn Rodan who was famous for this group of horses. There is evidence that some Bedouin followed a practice of breeding within the strain. This is a complex issue, and we will explore the concept more in the future.

The Arabian horse of the Bedouin is different from other man-developed breeds of horses, because the Bedouin did not breed to a single “Breed Standard.” In all probability, there was always a variety of physical types within the Arabian horse, since the only “Standard” was imposed by the severe conditions under which the Bedouin lived. Utility and functionality were their overriding concerns. While they did have an appreciation for beauty, their principal objective was to produce the swift, sturdy, amenable and tough horses that would keep them alive in the desert.